The 3 minute piece directed by Femi Ladi (Somesuch) brings a gritty, unorthodoxic but sleekly captured visual. Set out in an 8 hour day, the team worked closely to capture striking angles shot by cinematographer Olan Collardy. The range of shots included flying a drone in the underground 4 story complex, a crew of 25 all produced by Chiara Lafour.

Directed by Femi Ladi(Somesuch) & Executive Produced by our very own Dijian Eccles a production by DMND CLR in collaboration with Somesuch and Director of Photography for this picture being Olan Collardy you could expect nothing less than a piece that’s so visually masterful for the GRM Rated Awards.

A POV exploration with this video by Gerssis

Music & Dance, an exploration of the joy of black music and its inevitable outcome… Moving your body! A content piece for Galdemzine award-winning online and print magazine.

Galdemzine x Black In The Day

A camp & punk in spirit, chaos centering on joy and eccentricities, showing women/queer people in control of their own narratives. 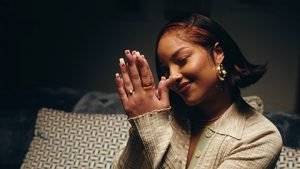 A  ode to weed smokers, a play with lights. Bill it up is a collaborative direction by Jafa & Lighting by Joe showcasing their ability to make something low budget but yet still a beautiful display of colors and performance.

Heartfelt, harrowing and honest, Loski releases the visuals for his short film Music, Trial & Trauma. A coming-of-age story set to highlight the harsh realities of life on the streets of London. Including a special cameo from multi Brit Award winner Emeli Sandé.